we Are University Heights.

Here's a link to a Letter to the Editor published January 29, 2014 in the San Diego Reader that clearly describes the issue.  (Scroll down to the second story.) 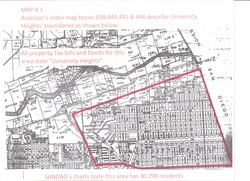 This is the Assessor's map, which shows University Height's boundary extending as far east as Boundary Street. These Traditional boundaries have existed since 1888.

Click here to see larger versions of both maps. 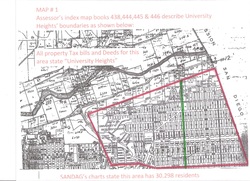 Click here to see the UHCDC's October 7, 2013 letter to San Diego's Interim Mayor and City Council President, Todd Gloria, requesting that the Assessor's maps be included in the new plans for North Park and Uptown.